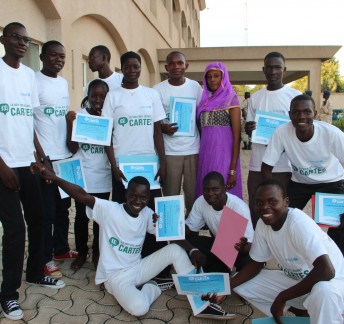 A group of ten young people from Moundou, in southern Chad, participated in the Digital Mapping training before heading down to the field to identify and document the problems in their communities. “It is us, the youth, who should raise awareness about the isues undermining our society and advocate for positive change. We must also inform the Government and Civil authorities to find solutions to the problems we identify during our mapping. Let’s get to work!” said Nehemiah, one of the young reporters who participated in this innovative initiative.

Chad is located in North Central Africa, measuring 1,284,000 square kilometres, nearly twice the size of France. Chad has a hot and sub-tropical climate, though temperatures do vary depending on area. The north of Chad extends well into the arid Sahara desert, whilst the south has a much wetter, and typically tropical, climate. The southern rainy season runs May-October, and the central rains from June-September. The north has very little rain all year and the dry season is often windy, and cooler during the evenings.

Mean temperatures are similar across most of the country at 25‐30°C, and only differ substantially in the cooler mountainous regions of the north at 15‐25°C. However, seasonal variations are large, and differ in their patterns for different parts of the country.

Each year, the length of the rainy season can vary considerably (by more than 30%). This means it is common for dry years to alternate with wet years. However, meteorologists say rain patterns are changing across the Sahel and there are more frequent dry spells.

Bordered by Chad, Niger, Nigeria, and Cameroon, Lake Chad currently covers only 1,350 square kilometers, down from 25,000 square kilometers in 1963. Because of the way it has shrunk dramatically in recent decades, the Food and Agriculture Organization of the United Nations have labelled the lake an ecological catastrophe.