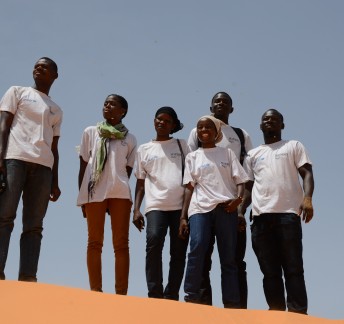 Through the digital mapping program on climate change, six young people aged 23 to 29 have identified and documented the impact of climate change on their communities, the problems they encountered and the possible solutions. This is not only a description of the state of things, but a springboard for discussion and action, a tool to unite citizens and decision makers and push them to act in favor of more respect of the planet they will pass on to their children.

Halima, Fatimane, Abcia, Raymond, Hassane and Islamane observed the consequences of climate change in the Zinder, Niamey and Tillabery regions – and they looked for the causes and the mechanisms responsible for what they observed.

Climate change impact is particularly harsh in Niger, where state of waterways is scarcer and scarcer.

For example, did you know that Niger hosts some of the world’s largest uranium deposits? Beside, the Niger River, which crosses the main city Niamey, is not only wondrous, but also precious. Indeed, it provides water for the 1.5 million people living in the metropolis.

Also, a as beautiful as they are in Niger, the dunes can also be very dangerous. Strong winds and rains push sand into waterways, causing floods that threaten the population and block access to schools and medical centres.

In Niger, the ensuing cost on climate change-related challenges is estimated at 7.5 to 15 billion euros for the period between 2000 and 2008 alone.