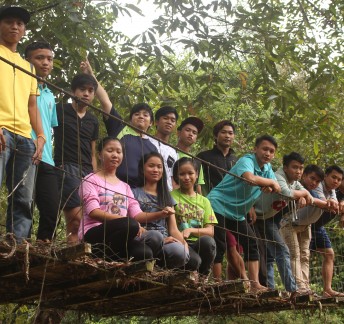 Green Voices of Borneo represents the voices of the younger generation in Sabah, Borneo who want their views and opinions about issues relating to climate change heard at the top level.

The name is very meaningful to them (young generation of Sabah, Borneo) because it is a combination of the whole generation of Sabah who want immediate action from the government to halt the activities that destroy the existing natural resources of their land and community.

Green Voices of Borneo also represents the voices of the young people who have started to raise awareness within the communities, regardless of race, religion and political affiliation, of their natural resources and its sustainable use. They want positive action from the Government to halt all destruction of forests, mangrove swamps, preventing the extinction of life on the river and the sea so that everything is well managed to maintain a balance of existing ecosystems in Sabah, Borneo.

The Green Voices of Borneo, led by young indigenous leaders in Sabah Borneo, symbolizes the revival and rise of Indigenous youth in Sabah’s awareness and concern over the issue of climate change which has now become one of the most serious global issues.  They are not only concerned about the issues relating to climate change, but also concerned with government policies that may be causing the balance of nature to deteriorate.

Green Voices of Borneo also acts as a voice to indigenous communities in recognition of the means of natural resource management. Various efforts and actions have been taken by the indigenous peoples to maintain and safeguard these natural resources; and its effectiveness has been recognized, eg:

Green Voices of Borneo feels all these efforts should be enhanced and promoted in order to have a positive action from the government to manage natural resources in a sustainable way.

In short, Green Voice Of Borneo represents the noble efforts of the youth group from Sabah Borneo as “voice and action”, not only at the youth level but for the public who are affected with the issue of climate change.

Day by day, the world climate is getting warmer and warmer. Uncontrolled human activity has contributed to environmental problems. Among the contributors to environmental problems was, the opening of uncontrolled forest cutting hills for building construction, construction of dams and uncontrolled waste disposal. This happens as a result of weaknesses in the planning and research to implement all development projects resulting in the destruction of uncontrolled environment. All this planning is made on the ground in the name of development and flood control.

The occurrence of haze problem also caused by uncontrolled burning of farm operators in Indonesia when the owner of the company take the easy way to burn in order to cleanse their farms to reduce the cost of clearing them. As a result, the neighbouring country also get the effect of this activity and problematic haze in Malaysia.

Deforestation in rampant also occur in Malaysia and have resulted in the destruction of ecosystems. The opening of the forest (land clearing/land conversion/forest degradation) to large-scale commodity crop farms led to the destruction of natural forests as well as the forest fragmentation. The effect of this case, an area of natural forest is getting smaller and indirectly also flora and fauna loss their habitat. This has provoked conflict between humans and wildlife. In addition, the destruction of forests has also resulted in flood risk become high and flood mud occurred as a result of soil erosion.